My First Quilt....A Finish and Lessons Learned Along the Way

I have always admired quilters.
Having now completed my first quilt, I have a whole new level of respect for these fabric piecing artists. I would consider myself an experienced seamstress....and while yes, I have now finished a quilt, I think it takes a lot more to become a "quilter". 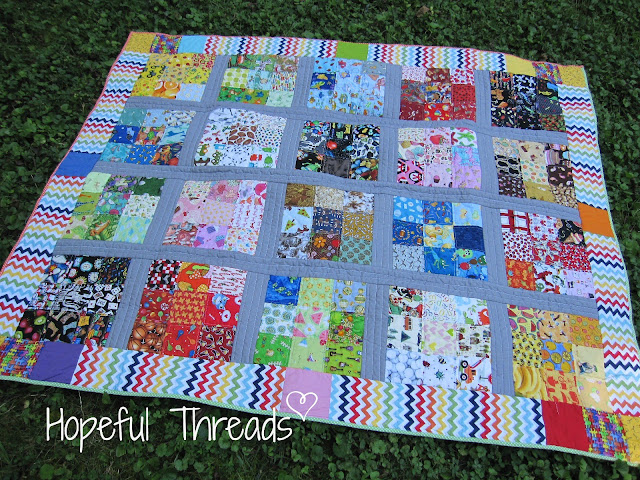 This quilt started MONTHS ago!
Even longer in my head. But, as I began to have a real idea of the type of quilt I wanted to create as my first, I began bouncing ideas and questions off of my quilt talented friend, Melissa/Sew BitterSweet Designs.  Melissa shared a wealth of advice and tutorial links and before I knew it, I had supplies gathered and no excuses remaining to delay my start any further.

And so....without a pattern or much detailed instructions, because I'm one of those "On A Whim" kind of gals, I started!

I knew all along I wanted to make an I-Spy quilt for my kiddos. I figured it would be something they would love regardless of the guarantee of flaws it was destined to include. I was especially fond of the ones I had seen that followed a rainbow theme, but wasn't exactly sure how this would all come together for me.

I had been collecting & creating I-spy charms for a very long time. 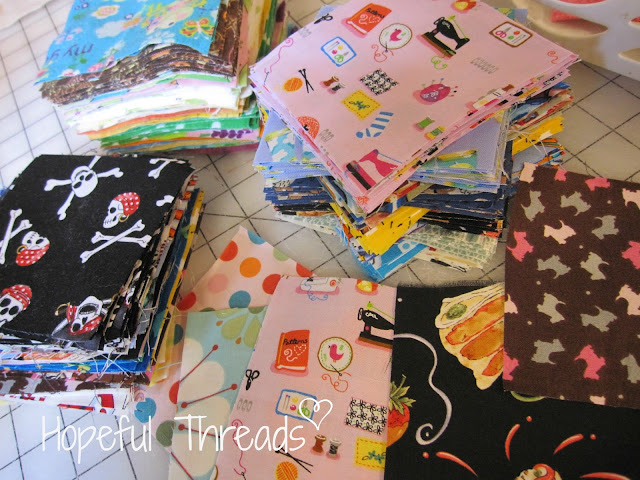 I decided early on that QAYG (Quilt As You Go) was going to be the best option for me. I figured it would be a lot easier for me to quilt the smaller sections and then piece them together rather than quilting the entire finished quilt. I think this was the right decision, as I struggled with lack of space and a small machine base even with the minimal quilting needed to attach the backing. 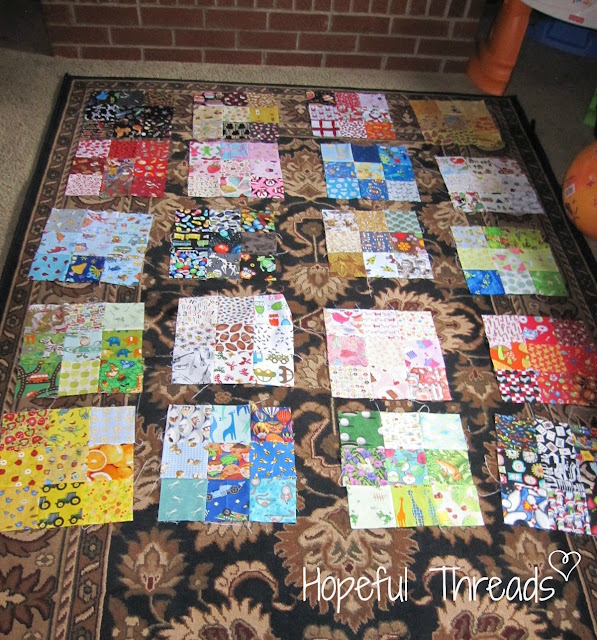 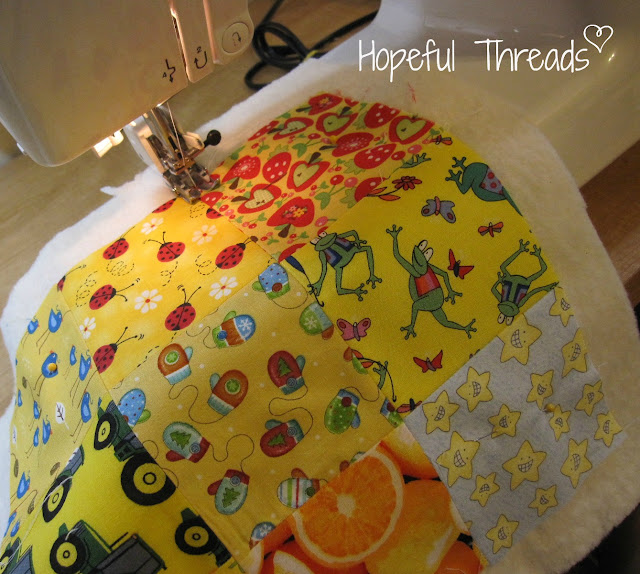 I went with a 9-patch for the I-spy blocks, each with a color focus, so I could have a sort of rainbow effect to the quilt. I stitched just inside of each of the charms for the quilting. 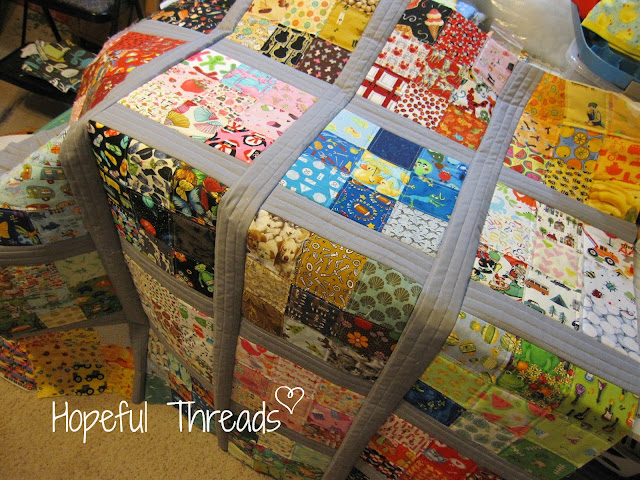 I sashed the blocks with a dark gray Kona....thank you again Melissa for this suggestion, LOVE the gray! I quilted straight, spaced lines for these pieces. 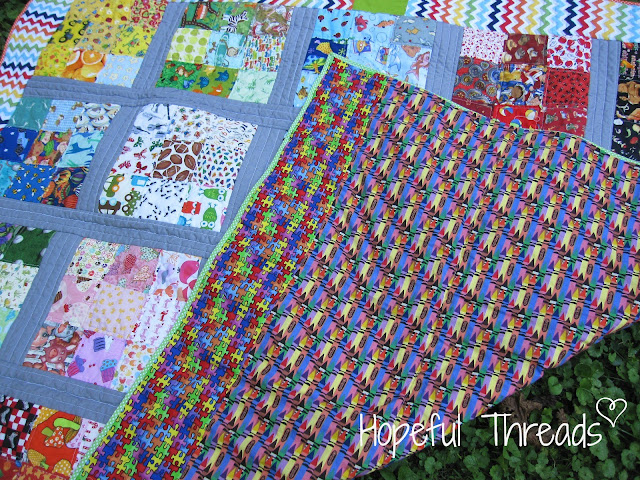 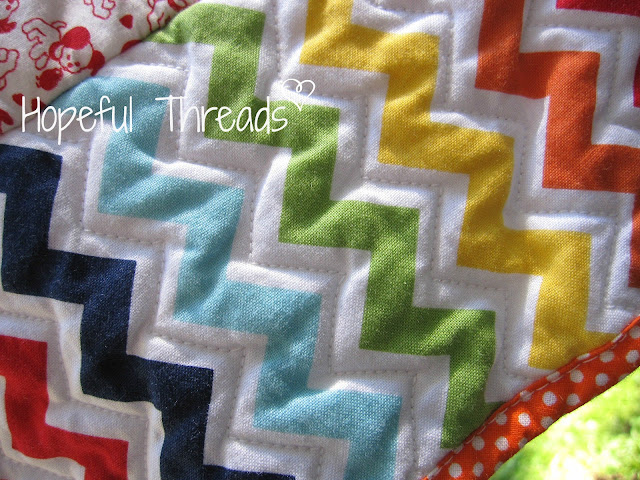 Then I bordered the entire thing with a rainbow chevron that I had originally purchased as the backing....but later changed my mind thanks to the input of all of you who shared your thoughts on my alternate option. I really love the alternate option too! Since I was doing QAYG, I decided that I would quilt between each colored chevron along the border. I absolutely love the finished look of this, but OH.MY.WORD that was so time consuming!!!! :) 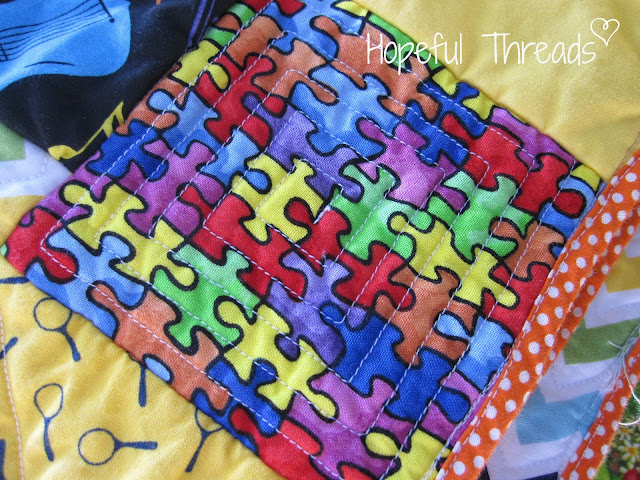 And since I still am no good at Geometry....the one subject I never tackled in high school and that kept me from quilting for a very long time.....I made some miscalculations on the border. Hence the addition of the puzzle print and magnifying glass patches added at the corners. These extra pieces did at least allow for some additional quilting practice. 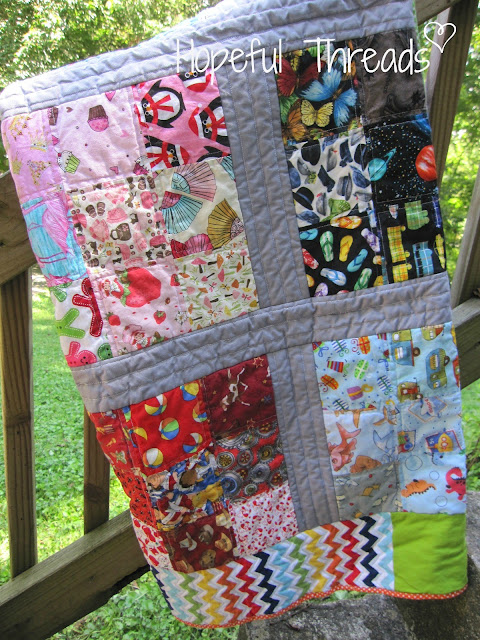 In conclusion....what I have learned about quilting.....
I have A LOT left to learn! :)
It requires A LOT of patience. Maybe more than I have on most days! lol!
Rarely do things go together as easily as you'd like to imagine they will.
You must have at least 1...possibly more...sharp seam rippers on hand.
It's VERY messy! 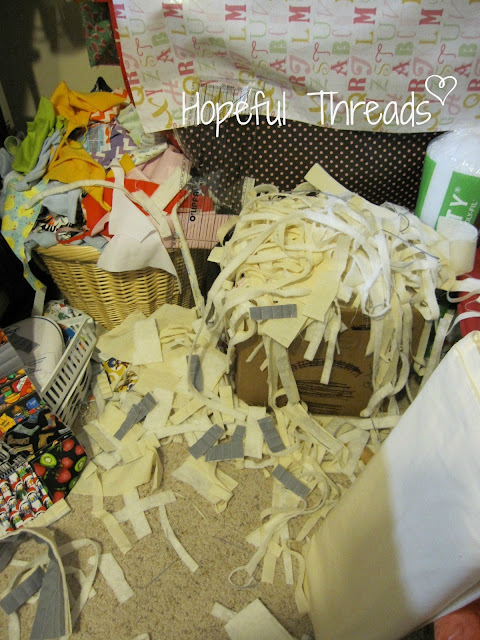 And....
You either have to REALLY love quilting or REALLY love who/why you are quilting for to stick with it at times.
When it's all said and done, washed and rippled and handed to that sweet child that has been asking for months if it is done yet, and his little face lights up as he runs away with his arms full of it.....well, you realize it was EVERY BIT worth it. 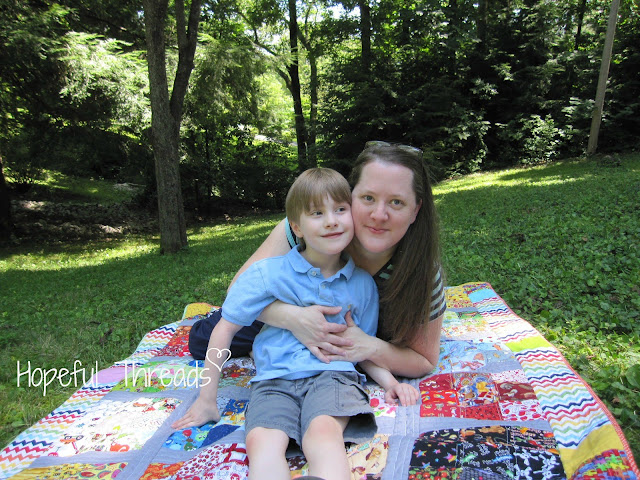 And finally....and maybe most importantly....the flaws don't matter. The "Perfect Quilt" is the finished quilt. And yes....once the labor pains of this one has disappeared from my memory, as I know they will, I will most definitely be making another. Maybe just with a pattern and little better prep this time! ;)

Blood, sweat and almost tears included. But.....
A finish I am so thankful I didn't give up on and am so proud to watch my kids play with and cover with and know we will all enjoy it for years and years to come.

Very cute!! I love the backing fabric!! You did a wonderful job!!

It is amazing!!! You did an incredible job! Congratulations! I bet people will start asking you for a pattern :) Can't wait to see what you make next!

I think it looks incredible and I can see how happy you have made a special little one. Now you are officially a quilter!

Ooh you've tackled the one thing I keep putting off! What a fantastic job you did Kristy, love it!

I can SO relate to this post, Kristy. Initially the mistakes I'd made, stood out. Nearly a year later, I see none of them... no one else ever saw any mistakes. Every time I Skype my youngest son, I see that quilt. It's either draped on the chair he's sitting on, or he's wrapped up in it. I know it's being well used and it's keeping my baby warm. When I finished making that quilt, I was so relieved, yet felt great pride at the same time. I have promised to make my other two kids a quilt each, but I'm still not rushing into it... LOL!!!

Quilting requires such precision. I feel that all quilters could sew clothes if they wanted, but I'm not sure the reverse is true.

I just ADORE your quilt!!! I love the rainbow effect and I agree that grey is the perfect colour for the sashing. I still want to make an I Spy quilt for the little people and I know I'm going to refer back to yours when I eventually do... unless they get too old for one because I take so long to make it. Pinning this. Oh, and that last photo is fabulous!!!

Woohoo Krista! Great job on your first quilt! It does get easier, the more you do...you know, practice makes perfect and all that :D Congrats, it's a darling quilt.

If you'd like to participate in an I spy swap, I'm hosting one that I'm looking to fill a few more spots! ; ) If you're interested, you can read more at my blog: http://heartathomemama.blogspot.com/2014/01/i-spy-swap-3-rainbowcolor-swap.html "Those who are happiest are those who do the most for others." ~ Booker T. Washington

Hopeful Threads
A place to share your creativity in a way that helps another.

Hopeful Threads exists to provide ideas and encouragement for others to #SewToShare. Currently, I am suggesting that each person simply look within their own communities and connections for opportunities to give back this way. Occasionally, we will also work on a specific project together that is open to all interested and available to participate. Simply like minded people sewing and sharing the experience and outreach together. "Sew" happy you are here!
* SEW TO SHARE *

"What you do speaks so loud that I cannot hear what you say." ~Ralph Waldo Emerson

"Life's most consistent and urgent question is, What are you doing for others?" ~Martin Luther King, Jr.

"So shines a good deed in a weary world." ~Willy Wonka

Inspired?
If something on this blog inspires you to create, great! That's the idea! Home sewers, feel free to use my tutorials to create as you choose, I simply ask that in addition to making things for yourself, you also find a way to give back with your creative talents. Please don't copy the tutorial itself. Content and photographs are the property of Kristy Smith.

As for my pictures, you are welcome to use project pictures when pinning or linking back to my posts. Pics of my family are just mine though, so please don't reuse them in any way. Thanks! "When we do the best that we can, we never know what miracle is wrought in our life, or in the life of another." ~ Helen Keller