Do you make New Year's resolutions? I never really believed in all of that. I figure if you really want to do something it certainly doesn't require a "New Year" to begin or a resolution to maintain it for that matter. However, last year I thought I'd give it a try. My first "real" New Year's Resolution. Know what it was? This blog. Hopeful Threads was begun as a New Year's Resolution.

I had this idea swimming around in my head for what seemed like FOREVER! I wanted to purposefully sew each month for a specific organization or need. I really wanted to sew more with others than I was able to coordinate locally. I wanted to see an outreach begin....expand....and touch lives on both ends. So, I put it out there and am delighted with how this year has turned out! 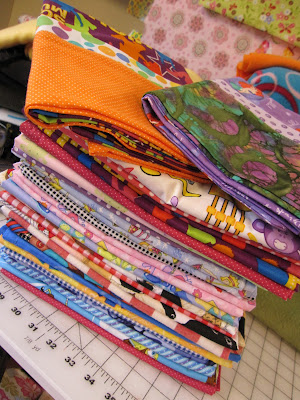 January 2011 - Pillowcases for our local DCS 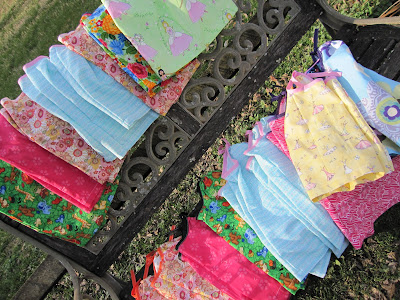 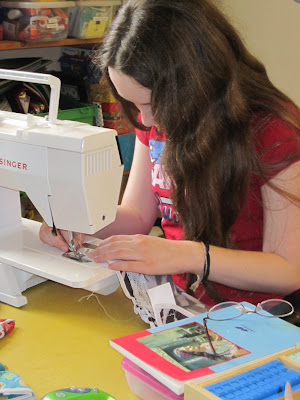 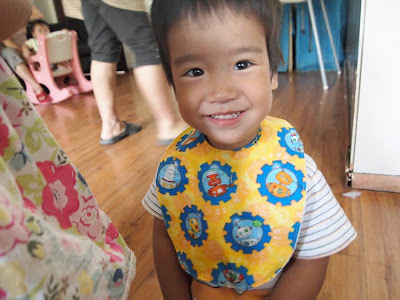 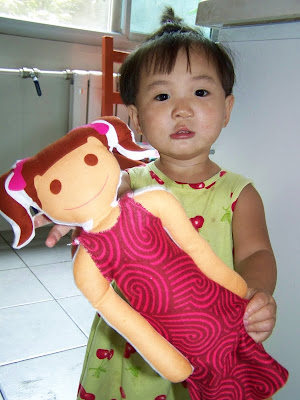 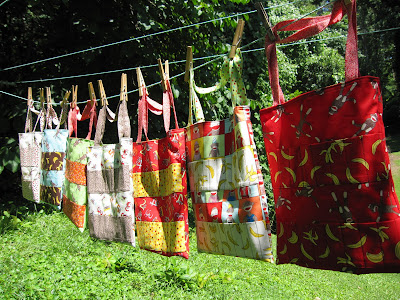 July we took a break to soak up some Summer and sew for our families. 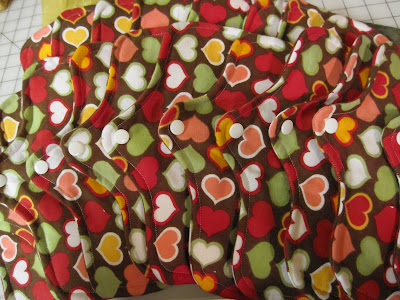 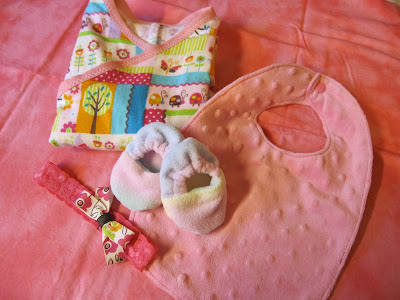 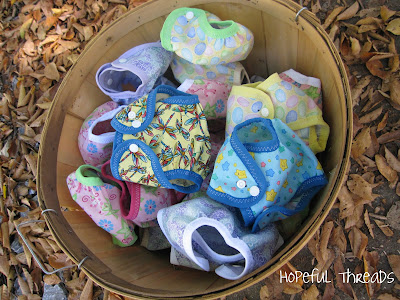 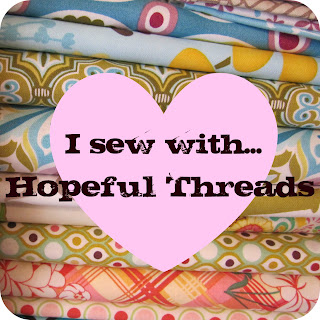 December we've paused to allow for a little extra rest and family time.

Wow! I feel so very blessed to be a part of this! To see that we have made a tangible difference for people near and far. To have met some of the warmest and most giving people. So, feeling rested and renewed with enthusiasm for what's ahead, I say let this New Year's Resolution continue!

"You must be the change you wish to see in the world." ~Gandhi

Thank you all for playing along for my Pay It Forward Giveaway!
Random.org has selected lucky #14...
Anonymous said... 14

I have SWOOM quilt pattern on my cutting table and am loving it. jillfroelich@yahoo.com


Congratulations! I've sent an email to the winner. Please respond within 48 hours.
Oh and...pssst.....I have a super fun giveaway planned for the New Year that I am sooooo excited about! Can't wait to share with you all!

Email ThisBlogThis!Share to TwitterShare to FacebookShare to Pinterest
Labels: giveaway 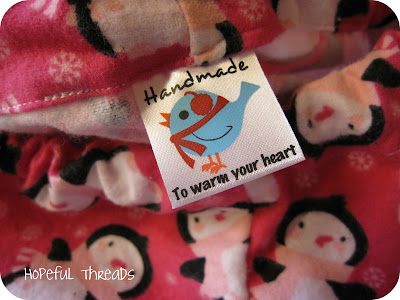 Yea, so I'm one of those that usually has the bright idea, when I'm already covered up with more than is humanly possible to get finished, to go ahead and make the extra PJs the kids need while I'm sewing their Christmas sets. Anyone else like that??? It sounded good, at least at first. ;) Half way through I was thinking "What was I thinking???", but trudged on and got them all done and I'm so glad I did! The children were thrilled and have pretty much lived in the new PJs....other than when we have to leave the house of course....which we are keeping to a minimum as we soak up this holiday time!


And since I made them all....17+ sets counting all those darling penguins that is....and since they won't be seen outside the house for someone to comment on and allow me that "proud mama" moment of basking in my handiwork....you all get to see them! ;) Thanks sweet friends for humoring me! Now, brace yourselves....
The patterns I used were a couple of McCall's and the quick to sew, Simple 30 min. Shorts. 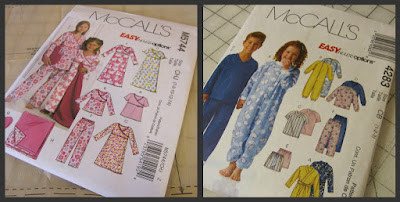 And this, my friends, was the mess I ended up with because I just cut and pile as I'm working...this would drive my mother INSANE!!! She's quite the "tidy seamstress"....I make a HUGE mess in the moment and then clean it all at once. I suppose whatever works best for each. :) 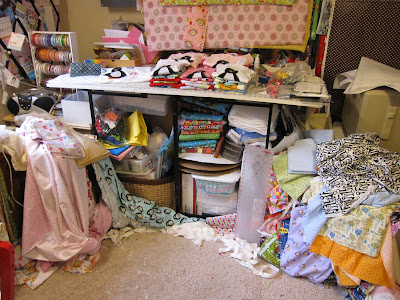 I'm still sneezing fabric fuzz from all the cutting too! :)

And let's just say that new to me serger I recently purchased has been well worked in! 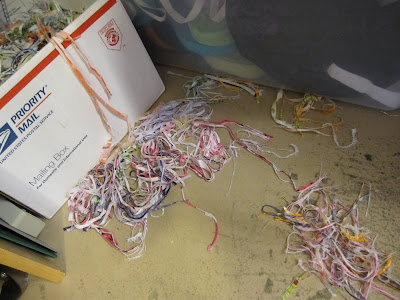 Now for the recovery process. Thanks for letting me share!
Happy Sewing!!! 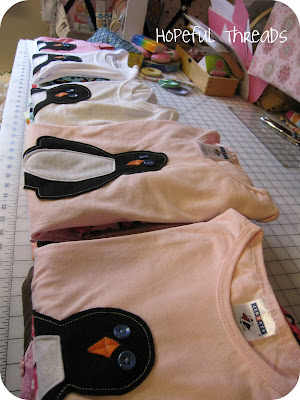 Best part, everyone loved them and made it all very much worthwhile!

And since penguins are super cute and not just for Christmas, and since I made a template for the applique on our shirts anyway, I thought I'd share it with you all in case you'd like to make your own penguins. They are super easy and can of course be personalized in a variety of ways. 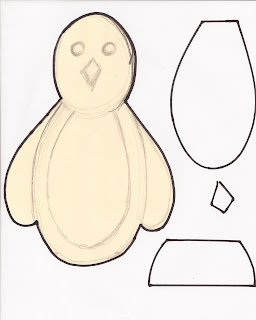 I simply sketched a basic shape and then created the layered pieces. Each piece is included in the applique template you can print out above. 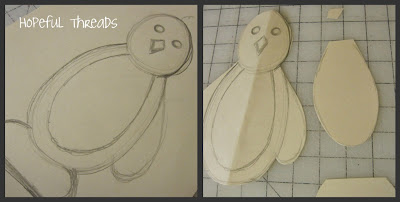 Cut the pieces from felt. I made very traditional penguins, but you could have a lot of fun making the belly from different printed felt or fabrics. 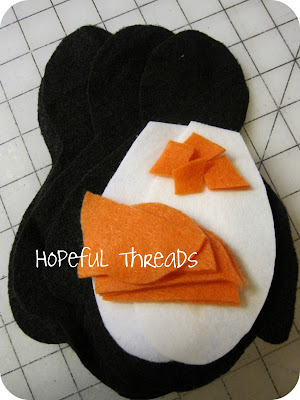 Pin the pieces to your shirt and embellish however you'd like.
You could use felt for the eyes too, but I went with buttons. Other fun additions could be bowties, scarves, hats, snowflake buttons scattered about....anything you'd like. 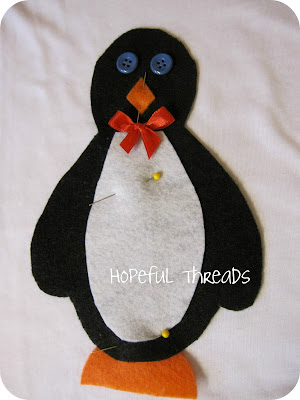 Stitch everything in place and your done! 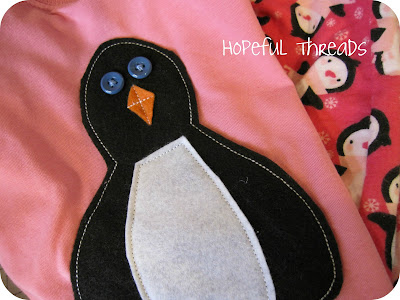 We had quite the adorable penguin parade around here for Christmas!
Hope someone else can enjoy our lil' fella too.

Wishing you and your families the GLORY & WONDER of this blessed season!
Merry Christmas!

Earlier this year I was given a special gift from Janet at The Empty Nest.

Janet had won a gift certificate from Natasha at Skye Reve Fabrics which she in turn gave away on her blog. Just because. I was the lucky winner! :) It was one of those things that came at just the right time to be an extra encouragement and brightener to my day and I've never forgotten her's and Natasha's kindness. It was more than just a giveaway!
Well, I just happened to open my email one day this week to find that I had won another gift certificate in a giveaway over at Dana's MADE, this time from Amanda at Modern Fabric Studio and in the spirit of paying it forward, I'm giving it away here!
That's right, you can win a $25 Gift Certificate to

GIVEAWAY COMMENTS CLOSED! THANKS FOR ALL THE ENTRIES!


So, if you're a follower of Hopeful Threads, just leave a comment on this post to be entered. Any comment is fine, but to keep from all the boring "I'm a follower" comments, maybe you could share what's on your cutting table right now....mine is COVERED with pajama sets I've been churning out to be ready in time for Christmas! :) Giveaway is OPEN WORLDWIDE! I'll draw & announce the winner Thursday, December 29th. Please make sure I can reach you via your comment.
Thanks for the fun in 2011, I have so enjoyed getting to know you all, sewing with you, and I'm looking forward with excitement to 2012!

GIVEAWAY COMMENTS CLOSED! THANKS FOR ALL THE ENTRIES!

Email ThisBlogThis!Share to TwitterShare to FacebookShare to Pinterest
Labels: giveaway

Time to announce the winner of the Lily Bird Studio pattern bundle giveaway!!! 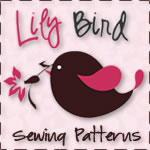 Congratulations Melissa!!!!
Melissa chose these 4 great patterns for her bundle...

and the Baby Toddler Dress.
Melissa, I see some dress sewing in your future!!!
Hope you have a lot of fun!

Thank you so much Lily Bird Studio for sponsoring this great pattern giveaway! 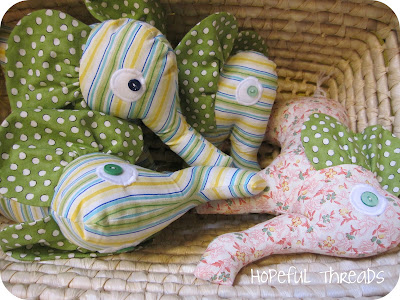 When I saw the free tutorial for these adorable stuffed elephants posted over at Riley Blake, babe was sitting with me. She immediately began jabbering all about that elephant and making her insanely cute elephant sounds. Just call it motherly instinct, but I knew I was going to be sewing an elephant very, very soon. ;)

And so became babe's newest friend who will find her way under the tree to be discovered and enjoyed. 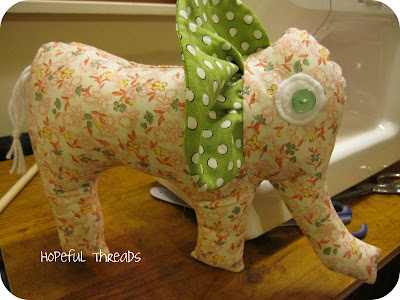 I chose buttons eyes and of course had to add the perfect lil' tag to finish her off! 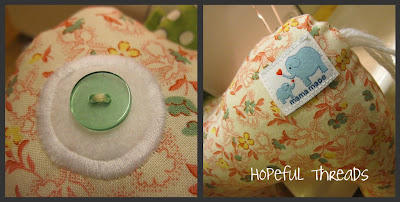 She was so cute and so easy that I made a few extra in neutral prints for a friend to distribute with other toys at our local homeless shelter. I hope there is another little boy or girl that is just as delighted to have a new little friend to love and cuddle. 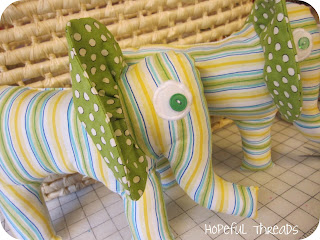 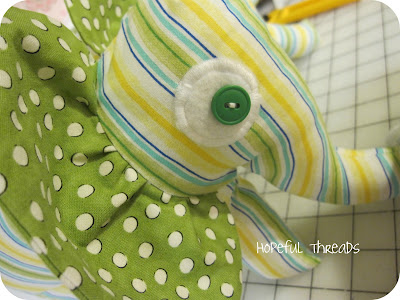 My favorite part are those EARS!!!! 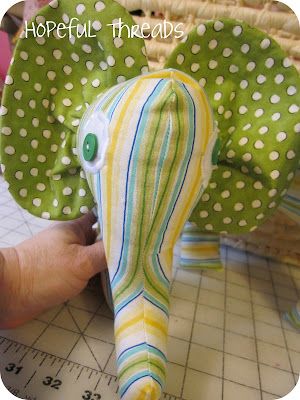 A few remnants of fabric, the free pattern and a little sewing time and you've got yourself your own too cute Pachyderm Plushie! Sorry I just couldn't help myself! ;)
Happy sewing and stuffing! "Those who are happiest are those who do the most for others." ~ Booker T. Washington

Hopeful Threads
A place to share your creativity in a way that helps another.

Hopeful Threads exists to provide ideas and encouragement for others to #SewToShare. Currently, I am suggesting that each person simply look within their own communities and connections for opportunities to give back this way. Occasionally, we will also work on a specific project together that is open to all interested and available to participate. Simply like minded people sewing and sharing the experience and outreach together. "Sew" happy you are here!
* SEW TO SHARE *

"What you do speaks so loud that I cannot hear what you say." ~Ralph Waldo Emerson

"Life's most consistent and urgent question is, What are you doing for others?" ~Martin Luther King, Jr.

"So shines a good deed in a weary world." ~Willy Wonka

Inspired?
If something on this blog inspires you to create, great! That's the idea! Home sewers, feel free to use my tutorials to create as you choose, I simply ask that in addition to making things for yourself, you also find a way to give back with your creative talents. Please don't copy the tutorial itself. Content and photographs are the property of Kristy Smith.

As for my pictures, you are welcome to use project pictures when pinning or linking back to my posts. Pics of my family are just mine though, so please don't reuse them in any way. Thanks!

"When we do the best that we can, we never know what miracle is wrought in our life, or in the life of another." ~ Helen Keller